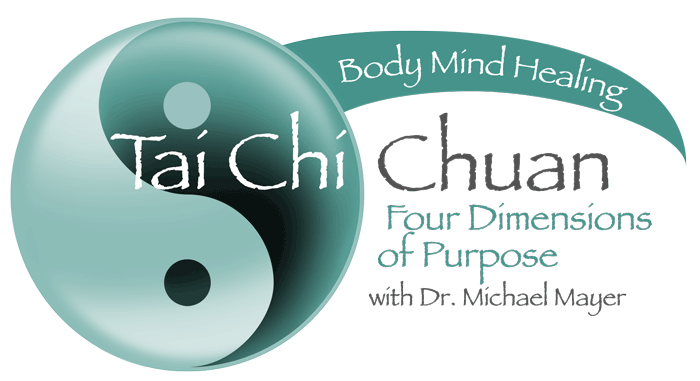 Michael Mayer, Ph.D. is a licensed psychologist and Tai Chi/Qigong Master Instructor certified by American Tai Chi and Qigong Association.  In November, 2015, we published an article, Bodymind vs. Mindbody, Integral vs. Integrative, to introduce the fundamental concepts in Dr. Mayer’s approach.

In this current article, Dr. Mayer focuses on another important concept: the four dimensions of purpose. For more in-depth discussion on this subject, please check out Dr. Mayer’s book: Secrets to Living Younger Longer: The Self-Healing Path of Qigong, Standing Meditation and Tai Chi. In that book, Dr. Mayer describes the historical background to this viewpoint in shamanism, Buddhism, and cross-cultural traditions of postural initiation. He also goes through various Tai Chi and Qigong movements and shows various meanings from the Four Purposes view.

To be introduced to the Four Purposes of the first Tai Chi movement called “Commencement”, we are proud to offer the following free videos, which will set you up for the Full Series of 19 in the complete set:

Each Tai Chi movement can be seen as having four dimensions of purpose: self-healing, spiritual unfoldment, self-defense, and changing one’s psychological life stance. By practicing the four dimensions, a Tai Chi practitioner is opened to deeper meanings and can find a multifaceted story expressed through their movements.

Let’s take for example the second Tai Chi Chuan movement, which some call Taoist Immortal Paints the Heavenly Rainbow. The practitioner starts with their hands in the stance of having both hands palms-down, as if holding two balls in a stream; then a counter-clockwise circle is made. One self-healing purpose of the movement can be found when the practitioner stops the movement with the hands in front of the heart is that the practitioner opens their heart to the direction they are facing. Secondly, a spiritual/shamanic purpose of the movement can be embodied if a practitioner imagines that, like an ancient shaman, he or she is painting a rainbow across the sky.

Thirdly, from the self-defense perspective, if someone is punching you, this movement makes a circle and a 45-degree angle to divert a force coming toward you; and this movement is part of learning how to yield to, not confront, the disarm an aggressive force.

Fourthly, this type of movement can change your life stance toward such linear forces in life psychologically and physically, particularly when you assume the correct posture of slightly pushing out your lower back (ming men) as you imagine catching a medicine ball in front of your heart.

It does not matter whether this is how any other teacher or practitioner interprets the meaning of this posture. What matters is how a posture helps the practitioner to find his or her own connection to the world behind the world.

My approach to Tai Chi has grown in part from my background in humanistic psychology, where discovery of one’s own unique meaning is paramount. As applied to Tai Chi Chuan, this means that instead of focusing on ultimate truths and contending about which of our interpretations is more “Tai Chi-ish,” I believe it is important to see that each of these four types of intention in Tai Chi practice contains its story. Each story has its value, which opens us up to a new world of meaning.

As with the example of the movement of Taoist Immortal Paints a Heavenly Rainbow, every Tai Chi movement can be seen as a letter of a long-lost, right brain hieroglyphic alphabet. These letters (postural stances) open us to discovering the consciousness of another world, just as did the discovery of Egyptian hieroglyphics.

In chapter 7 of my book Secrets to Living Younger Longer, I go through more Tai Chi movements and show various meanings from the Four Purposes view. For example, with “Shoulder Stroke” in Tai chi this is similar to the Bodymind Healing Qigong exercise for cleansing the liver; “Playing the Guitar” (also called Lifting Hands) as one lifts the foot can help to empower the Ming Men and help with lower back problems. “Push” has a similar feeling to Hua Tau’s Bear animal frolic for the Liver, and when one pushes the point Liver 14 (below the nipples) is emphasized, which is at the end of the liver meridian, associated in some animal form systems with the Bear. Cloud Hands can be seen as an exercise for clearing the heart of negative emotions (page 171).

In Chapter 6 and throughout the book I show how Standing Mediation Qigong has these 4 dimensions of purpose. In addition to classical meanings, many Tai Chi practices and Standing Meditation practices can be seen as developing “the Golden Ball” referred to in the Western and Eastern mystery traditions, such as the Grimm’s Fairy Tale of Iron John and the Wildman (page 24).